Dec 10, 2012 | Runescape, Runescape Guides, Runescape Tips | runescape3coin |
You expect to see only fields of grazing deer and idle monsters but when you turn the corner, there’s chaos. Crowds crush together, jumping around and blasting spells and swinging huge weapons. You join in, and though all possibility for any real coordination is lost in the frenzy, a sense of community, of belonging, solidifies as everyone strives to destroy a shared target. In Guild Wars 2, ArenaNet builds these events into every single zone, teasing you to explore by instilling a sense that despite Tyria’s colossal size, another surprise isn’t far away.

There’s no global player versus player combat in main zones where you’ll level up to the 80 cap. Like Turbine’s The Lord of the Rings Online, Guild Wars 2 establishes a friendly, inviting atmosphere by setting everyone on the same path to vanquish a seemingly invincible evil, and effectively removes many of the genre’s tedious restrictions on cooperation. There are no long lines to wait in, no cliques of high level players lording their seniority over the rest, no wristbands required to see the most interesting stuff, everyone can easily take part in the cyclical, world-spanning party.

Anyone who’s played Warhammer Online: Age of Reckoning and Rift should be familiar with the idea of public questing, which ArenaNet utilizes to achieve spectacular effects in Guild Wars 2. More than serving as simply another bit of busywork, the events fill out the fiction of each zone, requiring those present to do things like aid Asuran scientists in a fight against colossal fiery destroyers in a volcano’s superheated stomach or defend a drowsy mountainside shack from rampaging steam-powered creatures. Events are often linked, so what begins as a simple kill quest could eventually turn into a full-on centaur invasion of an otherwise peaceful township, making each task more exciting because it could be lead to some sinister and undiscovered threat.

These events serve as Guild Wars 2’s primary form of quests. They activate in every zone regularly, and at low levels involve kill, escort or collection tasks. While the initial event goals may not be especially memorable, they effectively bind your cause to everyone else’s and set the tone for the rest of the experience. There are no hoops to jump through to participate in an event. You don’t have to group up and make sure everyone’s on the same step. There’s no waiting around for a group that’s already engaged the enemy to finish up so you can beat up the mob when it respawns. Instead, when something happens, you just show up and play.

Need help in Guild Wars 2? Check out IGN’s wiki.In higher level zones the events become more complex in nature, until, in the level 70 through 80 areas, you get zone-wide stories culminating in thrilling climactic encounters in ominous coral-lined battlegrounds. Even before reaching those, the outcomes of events beyond the starting zones gain significance as entire in-game structures can be destroyed and rebuilt, and waypoint travel through contested territory temporarily blocked. These events never seem to cease, making Tyria feel chaotic and vaguely plausible, a place where the forces of good and evil don’t simply wait around for your permission to act. 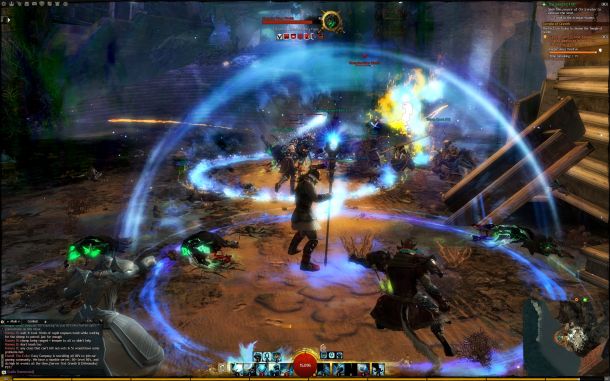 You get experience and virtual currency for partaking in these roving battle parties regardless of which stage you happened to walk in at. By stripping away restrictions to join and generously blanketing all involved with rewards, ArenaNet provides ample motivation to bunch up and share the storytelling experience as NPCs shout orders and crack jokes while monsters attack. It brings the whole world together so naturally that there’s rarely a lonely moment, and anytime the in-game interface lights up with notifications and you see a big cluster of players, it’s always a joyous event.

One drawback of this system is, though the social experience and spectacle of the bigger event chains can be exhilarating, the gameplay doesn’t really match up. After running an event multiple times and learning the story and its mechanics, the initial sense of wonder melts away, and most are left doing the same old dull skill rotations over and over. Often such a big crowd gathers at an event that it’s easy to get lost in in the fireworks of spell effects and slashing of giant weapons, making it difficult to tell what effect you’re really having in the overall battle. As social storytelling devices the events are brilliant, but in making the experience accessible to all, sophisticated gameplay is sacrificed.

Still need help in Guild Wars 2? You can also check out IGN’s iOS app.Aside from events, the world of Tyria is dotted with quest givers represented by hearts on the world map, and the tasks they offer are more standard MMO fare. There’s still no quest log associated with these NPCs; their demands can be met by simply standing near them and completing specific tasks like rousing lazy workers, mending fences, killing enemies and retrieving artifacts. Compared to the hyperactive pageantry of the event system, the gameplay of the heart tasks feels tedious, despite ArenaNet’s frequent implementation of alternate skill bars to add variety. They’re something to do instead of something worth doing, which even ArenaNet appears to recognize because heart tasks appear nowhere in the post-level 70 zones. 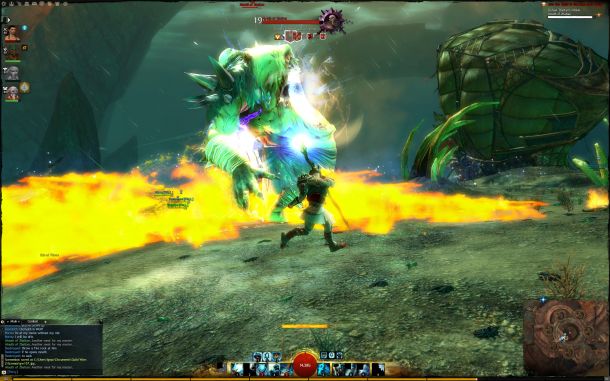 Still, event chains and heart tasks are often built to overlap, so not too much time must be spend taking care of Guild Wars 2’s chores. Better yet, nearly everything in Guild Wars 2 awards experience, from mining to jumping up the sides of mountains to reach vista points to leveling your crafting skills by discovering recipes for stuffed mushrooms and cheese pizza. If someone else in the world is already attacking an enemy, you can attack too and still claim loot and experience. If someone is already mining ore, that doesn’t prevent you from mining it as well. So not only are other players barred from attacking and killing you in the PvE world, they’re prevented from inconveniencing you, which casts off a significant amount of unnecessary tension usually associated with MMO play. You’re constantly showered in positive reinforcement, given items or experience or currency or all three for nearly everything, and yet it never seems excessive to the point where the rewards lose their significance.